All students prepared to succeed in a diverse world. 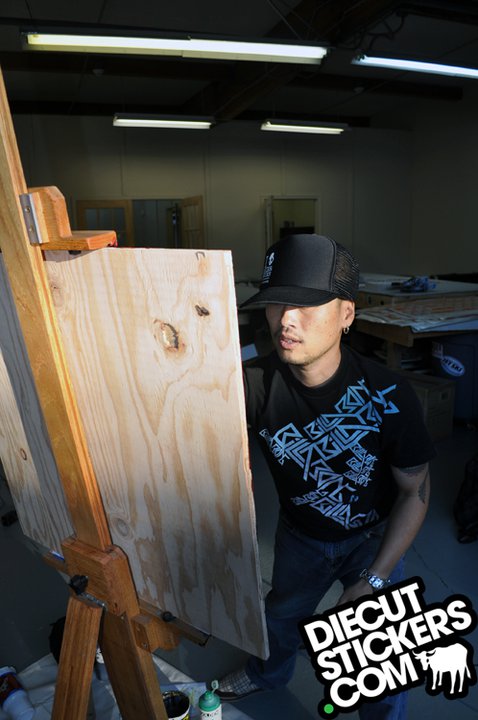 Timberline Alumni Son Duong has made a career creating what he loves most --  art! After graduating from high school in 1987, Duong attended the Art Institute of Seattle where he earned his Applied Arts Degree.

“I was pretty much an art nerd because that’s all I wanted to do,” said Duong, who did participate in band his freshman year.  He took various art classes throughout school. Additionally, he was involved in photography, yearbook, and journalism.

While there were few teachers who pushed him to do what he does now, Duong credits art teacher Ms. Donnelly for helping him develop his skills. “She was there to help me and pushed me to do what I wanted to do, (giving me) a sense of encouragement,” said Duong.

One of Duong’s most memorable experiences in high school was when he redesigned the school’s yearbook. “I saw what we had before and thought it was too traditional and boring,” said Duong. “So I convinced my yearbook teacher to let me do something different, bright, and beautiful.”

Duong worked alongside his best friend, John Rusnak, to make the redesign possible. “[John] was really good at inking and cutting with an exacto knife,” said Duong. “I recently learned of an art tool called the "airbrush" and wanted to use it in this piece. I had seen a news TV show called "1984" and thought that I can copy the graphic from it and do a "1987" in place of it on the cover.” Through this project, Duong designed all the graphics and drawings on the inside as well as the graduation brochure.

The following year he attended the Art Institute of Seattle (AIS) where he recognized his yearbook cover in a magazine with the tagline “New and Different.”

“I was all smiles,” said Duong. “I love to see that I can inspire people with what I do.”

Through his art, Duong enjoys doing new things, or otherwise finding new ways to do repetitive things. “I'm always told that my art has no style and that I don't focus on one thing. My answer to that is if you like art and design you should learn to do many things and not just one if you're going to chose it as a career,” said Duong. “I love to paint, illustrate, do typography and I learn new things all the time.” Duong has designed logos, snowboards/wakeboards, boat wraps, bus wraps, and more.

Aside from his love of art, Duong also loves Mexican food. His favorite movie is the original Star Wars, which “blew his mind” and inspired him when he first saw it hin 1977. Additionally, Duong collects various Star Wars toys. He also loves ‘90s hip-hop as well as James Bond movies. His main hobby and passion, however, has always been art. “If I can do it 24 hours a day, I will,” said Duong. One of his favorite methods of art is watercolor portraits.

“When I was a small 5 year old back in Vietnam. We lived with my aunt across from a movie theater and every 2 weeks they would put up huge canvas paintings of the movie that was going to be shown,” said Duong. “I would be sitting there waiting to see the art be installed, and I think that is what inspired me to do what I do now and I've always remembered that story.”

Duong shares his advice for students who wish to pursue the same career as him; “Be persistent, learn your craft and be good at it. Learn to do many things in your field and not just one thing,” said Duong. “It will be hard to make good money, but the payoff in seeing your creations in magazines, ads, or billboards is priceless.” Duong also mentions that keeping a sketchbook on hand is always great. “That sketchbook is your window into any realm you wish to go.”

To view some of Duong’s work click here: https://www.coroflot.com/son1ne

North Thurston School District does not discriminate in any programs or activities on the basis of sex, race, creed, religion, color, national origin, age, veteran or military status, sexual orientation, gender expression or identity, disability, or the use of a trained dog guide or service animal and provides equal access to the Boy Scouts and other designated youth groups. The following employees have been designated to handle questions and complaints of alleged discrimination: Civil Rights Coordinator and Title IX Officer: executivedirectorHR@nthurston.k12.wa.us, 360-412-4453; Section 504 Coordinator: Leslie Van Leishout, 504@nthurston.k12.wa.us, 306-412-4484. Address for both: 305 College St. NE. Lacey, WA 98516. http://www.nthurston.k12.wa.us/privacypolicy
Copyright © 2002-2021 Blackboard, Inc. All rights reserved.